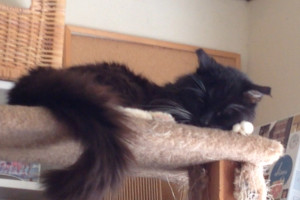 Fifteen years ago, give or take, I was sitting in my living room, watching TV, when I heard an enormous insistent meow from outside my house. It sounded like the cat was on my front porch. But there wasn’t any cat on my front porch. I heard another, even more insistent one, and little by little, was able to locate the source. Across the street, up against a house, a flea-infested, bedraggled less than one pound kitten was sitting next to his dead sibling. Apparently the mom was moving the litter, and decided not to come back for them. But he was having none of that. I took him to get checked out, and he had so many fleas, the vet would only take a very small blood sample, because he had so little blood left. Despite all this, he made it through. When I finally let him out of the bathroom in which I’d been keeping him for his convalescence, he walked directly over to Sophie, who had been keeping watch over the door for days, and then walked up her right forefoot and onto her back. And that was how I got Arthur. Arthur was an odd duck – at around two, he decided that he was a hermit, and moved into the closet under the stairs. He came out for meals and occasional interactions, but mostly he stayed there. For 2 years. Then he decided to come out, but only if I was the only person in the house. And so it went, for many years. At the end of 2011 he started losing weight, and nothing we did seemed to help. I took him to a specialist and he was diagnosed with small cell lymphoma, a fairly common cancer in cats. It’s not curable, but there is a course of treatment that is pretty low-key, and if a cat does well on it, he or she can often live another 18-20 months. Arthur lived 38 months, most of them in really good shape. He started to lose weight again last November, but it was gradual, and otherwise he was fine: hanging out on the most beat-up of the cat trees was one of his favorites. I decided to let him tell me when he was ready – he had always displayed such an overwhelming will to live I thought I should give him that. This week turned out to be the week that his will was no longer enough, so today, after a long day of talking and petting, I let him go. Rest in Peace, Arthur.